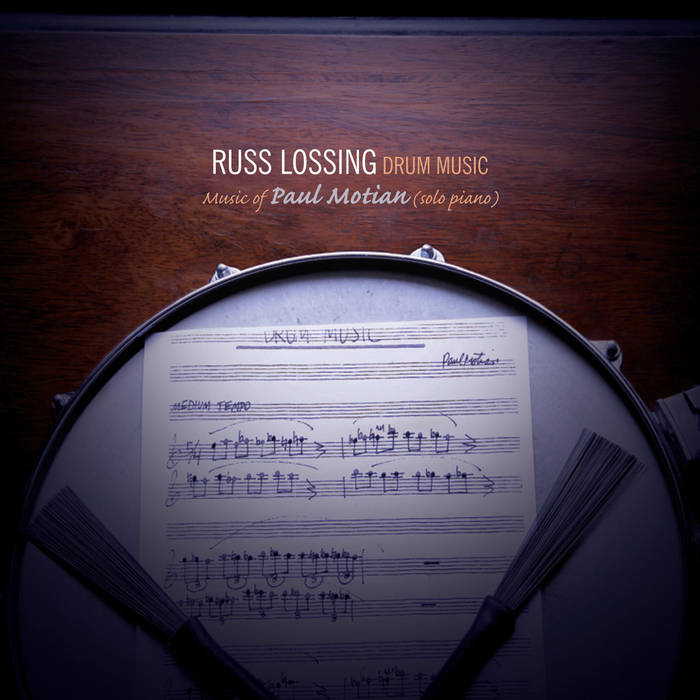 The music of the legendary drummer/composer Paul Motian has inspired generations of open-minded musicians. Motian’s singular compositional and percussive voices shaped the world of jazz for over 50 years. Unfortunately, Motian passed away in November 2011, an iconic figure silenced.

Like so many musicians, pianist and composer Russ Lossing found inspiration in Motian’s accomplishments and collaboration. His new release Drum Music was recorded as a tribute to Motian, both as a musician and a friend. Lossing recorded ten of Motian’s original compositions on the occasion of the drummer’s 80th birthday (March 25, 2011). The release has since been turned into a tribute to the master.

Lossing has been a well-respected member of the New York jazz scene for nearly two decades. He has collaborated with many of the most creative musicians, from Downtown heavies Mat Maneri and Bobby Previte to the jazz centrists Billy Hart and Dave Liebman. Along the way, Lossing found himself partnered with the iconoclast drummer Paul Motian.

Motian had long been associated with the cutting edge of jazz and improvised music. The drummer’s résumé spanned five decades of jazz history, Motian performed with numerous talents, from Bill Evans and Keith Jarrett to Bill Frisell and Tim Berne. Motian’s gift for collaboration allowed him to develop relationships with a diverse range of musicians, young and old alike.

Lossing was able to perform alongside Motian in ensembles led by the drummer and in his own groups. In doing so, the pianist became intimate with Motian’s repertoire. Lossing had played all of the material recorded on Drum Music with the composer over a 15 year period, learning the intricacies of the tunes from their deceptive but sing-song melodies to their unique rhythmic structure. Lossing recorded all the music in one long take but edited “Drum Music” to conclude the recording, as it was Motian’s break tune and a perfect conclusion to the program.

The recording begins with “Conception Vessel,” a swirling, haunting theme that Lossing embellishes with a winding improvisation. “Gang of Five” follows with a paced percussive introduction played inside the piano that softly builds around the introspective melody. The contemplative “Last Call” is elegiac and staid while “Fiasco” builds up pace with off kilter chords framing the manic composition. “It Should Have Happened a Long Time Ago” is a lilting take on Motian’s melancholy ballad.

“Mumbo Jumbo” is given a tight, clustered arrangement that is a clever stylistic amalgamation of Thelonious Monk and Cecil Taylor. “Olivia’s Dream” is a subtle study that Lossing fills with color while “Dance” prances through the octaves of the piano with grace and daring. The ringing “In Remembrance of Things Past” has Lossing caressing a delicate yet guarded melody. Finally, “Drum Music” concludes the program with a clever delayed mirror of the melody that builds into a strident solo.

Lossing has put together a tremendous program of interpretations of Motian’s elegant yet knotty compositions. The juxtaposition of tuneful and complex has made the drummer’s music some of the most celebrated of the past few decades. Practitioners and fans alike have made these compositions as relevant and studied as those of Motian’s own heroes, including the oft-covered Thelonious Monk. Drum Music has not only proved to be Lossing’s tribute to a lost friend and hero but also a raising of Motian’s work onto the pedestal of jazz legend.

Bandcamp Daily  your guide to the world of Bandcamp